You absolutely can’t go to Vietnam without going to Hoi An.  In fact it’s one of my favourite places ON THE PLANET and half the fun is exploring the markets, lazing on the beach or meandering around the shops at your own pace and having your own adventures.

But over the years, because I’ve been so many times (four at last count!) people ask me what they should do when they visit this little slice of paradise, so here are three of my favourites.

Hoi An food is a little bit special, and Morning Glory is a fabulous restaurant in the old town – it specialises in traditional street food and I highly recommend it  (it’s popular, make a booking) – but it’s their cooking school that really blew us away.  Our day started with a trip to the markets to shop like the locals shop.  We watched a determined lady chopping into a pig’s head with an expertly handled cleaver, prodded at piles of crabs neatly tied with string, and squeezed exotic fruit and vegetables by the basketload.  There were plenty of mystery ingredients, and utensils for that matter, for our guide to explain to us.  Then it was back to the cooking school to become expert Vietnamese chefs (in the space of about 3 hours. No pressure).

It’s extremely well run.  The classroom is set up with all the ingredients in front of you and your own cooking station.  The very charming Lulu demonstrated the dishes, then we would all attempt to make them ourselves.  There were plenty of assistants who helped us when we looked lost and confused and Lulu would cast an approving eye (well, I think it was approving.  She spent a lot of time laughing at us!) over our finished dishes.  We mastered a dumpling soup, rice paper rolls, crispy pancakes, marinated barbequed chicken and a green mango salad.  It must’ve been alright, because we ate it all.

Just a little something I made myself!

2.  Hit the road with Hoi An Motorbike Adventures

These guys know how to show you a good time.  We did a full day tour  (the Mountains and Delta Explorer) that took us inland from Hoi An following tiny paths, crossing the river on local ferries and on floating bridges, waving at the local kids, and watching water buffalo working in the rice paddies.  It had it all.  I’m not a motorbike rider, so I was on the back of a bike with my own local driver, the ever smiling Mr Yu.  Gav has his motorcycle licence, so he chose to ride a scooter.  The other option was to ride an old Russian Minsk motorbike (Gav reckons he’s doing that next time!).

It’s a cracking day out, starting with a stop at a local coffee shop and then it’s on to some significant Vietnam war sites.  There is time to jump off the bikes and wander and plenty of commentary from our laidback guide Mark.  He had an uncanny knack for being able to give you an overview of the local history in about 45 seconds.  He also gave heaps of insight into life in Vietnam and was happy to answer all of our questions (some of them extremely intelligent, some of them downright stupid (the questions, not the answers!)).

At lunch, in a little country restaurant,  a bunch of local blokes dragged Gav into a complicated drinking game that he never fully understood, and bordered on a hostage situation.  Our guide rescued him just as the steaming bowls of pork and noodles were served.  After many claps on the back from the local lads, and more than one suggestion that Gav should hurry up and marry me because he’s very lucky to have such a funny girlfriend (they had a point, obviously), it was time to move on.

The floating bridge was truly spectacular, as was meeting the tiny old lady who emerged from nowhere to bless us and pose for photos.  Her story is an incredible one – of loss and persecution, mostly.  I won’t give it away.  Do the tour and meet her!

This is such a great way to see the countryside and to get off the beaten path.  You see the locals going about their daily life and you’re getting around exactly as the locals do.  We loved this tour so much that we’re doing a longer one with them in a few months time.  We’re hooked.

How cool are floating bridges? 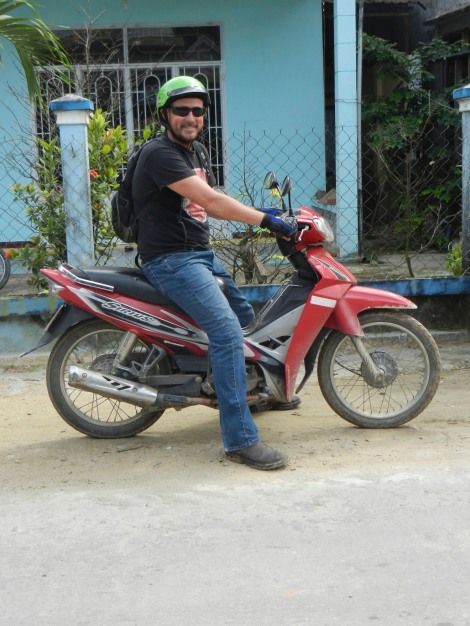 3.  Get some new threads from Mr Xe

There are a gazillion tailors in Hoi An and everyone who’s been will give you a recommendation.  If you’re after a suit, I urge you to give Mr Xe a go.  I can’t vouch for how well he knocks up a dress, but when it comes to suits, the guy is a perfectionist.

Gav decided he was in the market for a suit and the girls in Mr Xe’s shop were extremely helpful.  They helped him pick a style and the right fabric, before the preliminary measurements.  You know that saying “measure once, cut twice”? Well, Mr Xe takes it to the extreme.  The assistant takes measurements, Mr Xe takes measurements (and if you’re lucky, gives you a playful slap on the butt) and then we popped around to the workshop where Mr Xe’s brother took measurements too.

The true colour of Mr Xe’s genius was seen at the fitting though.  Gav tried the whole ensemble on (and looked mighty fine too!) and I could not fault it.  The fit was fabulous.  The style was perfect.  Other than the fact that the buttons and buttonholes still had to be done, it looked incredible.  Then Mr Xe walked in, circled Gav slowly, squinted, circled him again, then simply said “I don’t think so.”  His amazingly well trained eye had spotted a tiny bulge near where the sleeve joined the body.  And it simply would not do.  Gav was immediately bundled onto the back of a scooter (in all his finery, it looked like a scene out of a Fellini movie, to be honest) and was sent back to the tailors’ workshop to have that unsightly bulge removed.

The suit fits like a dream, and at less than $200 it was an extremely good investment. 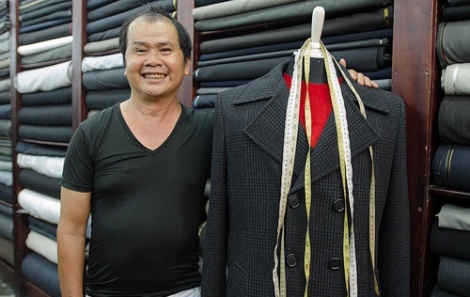 Of course, there are heaps of other things to do in and around Hoi An.  If you’ve been there, you know what a truly special place it is (what did you love?  Let me know!).  And if you haven’t, then you should stop what you’re doing and go immediately.

5 responses to “Three Awesome Things to Do in Hoi An”